Still very popular in today’s culture is the Jolly Roger, the name of which was given to any of the various flags flown to identify a ship’s crew as pirates. The most common flag that identified a ship’s crew as pirates is the skull and crossbones: a skull above two long bones set in an x-mark arrangement on a black field. The name “Jolly Roger” has been thought to have come from joli rouge (pretty red), an ironic French description of the bloody banner flown by early privateers. These flags were intended to strike mortal terror in the hearts of the pirate’s intended victims. 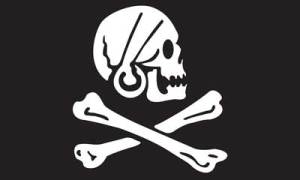 This design was reportedly used by the pirate captains Edward England, John Taylor, Sam Bellamy, and John Martel. Despite the current popularity, most pirates in the 17-18th centuries used plain black flags. Pirates did not use the black flag or Jolly Roger flag at all times. Instead they stocked a variety of flags and would fly false colors until they had their prey within firing distance. When they had their victim within range, it was then that the Jolly Roger flag would be raised, often concurrently with a warning shot.

An interesting tidbit is that in World War II, it was common practice for the submarines of the Royal Navy and Royal Australian Navy to fly the Jolly Roger on completion of a victorious combat operation as a display of boasting and slyness instead of mayhem. Additionally, since the decline of piracy (although pirates in today’s world still exist), various military units have used the Jolly Roger as a victory flag and a show of fierceness and stoutness.