Hurricane season in the Atlantic Ocean officially begins on June 1 of each year, and lasts for nearly six tumultuous months before it comes to a close. On average, over 100 tropical storms form over the Atlantic. 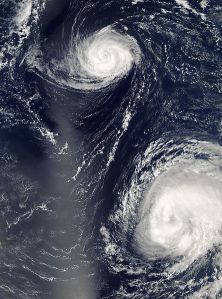 Due to this high rate of activity, mariners have historically depended on warning flags displayed at their harbors and Coast Guard Stations to warn of approaching ocean storm systems.

In 2007, the U.S. Coast Guard re-established a Coastal Warning Display (Storm Flag) program at selected Coast Guard boat stations throughout the U.S to warn the public of approaching storm conditions. Coast Guard stations had participated in the National Weather Service’s official Coastal Warning Display program for over 100 years, along with yacht clubs and marinas, until it was discontinued in 1989. Today, experienced boaters can easily identify the meaning of such nautical flags, whose geometric shapes and colors represent the severity of impending weather conditions.

The flags serve to warn mariners of small craft advisories, gale warnings, storm warnings and hurricane warnings. And these flags are being used more often than ever. Scientists claim that rising air and water temperatures worldwide are creating more frequent and severe hurricanes.

A hurricane is a tropical storm with winds that have reached a constant speed of at least 74 miles per hour. The eye of such a storm is vast, usually measuring 20-30 miles wide, and can envelope more than 400 miles. Dangers of a hurricane include torrential rains, high winds and storm surges that leave major destruction in their wake. At sea, hurricanes can last for 2 weeks or more and can run a path across the entire length of the United States’ Eastern Seaboard before dissipating.

In addition to hurricane flags, there are also international maritime signal flags—one for each letter of the alphabet—that mariners can use to spell out messages or can be combined to form a code word. Boating enthusiasts and Atlantic coastline dwellers can breathe a sigh of relief this year, as the 2009 hurricane season ended uneventfully on November 30 with just three storms reaching destructive hurricane status instead of the average six.