The flag of Algeria was adopted on July 3, 1962, when the country gained independence from France. The flag is rectangular and divided vertically into two fields.  The left field has a dark green background and the right field has a white background.  Intersecting the two fields, in the center of the flag, is a red star and crescent. 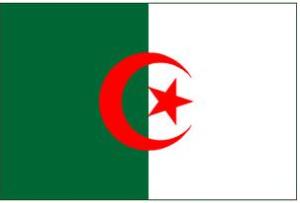 The detailed history of the Algerian flag is somewhat unclear. The colors in the flag—white, red, and green—are used in the flags and emblems of many Islamic nations.  The best explanation of the Algerian flag’s design is that it is a combination of two flags used in what is now the country of Algeria.  The flag of the Algerian Regency, which governed the area from the sixteenth until the nineteenth century, had a red background with a white star and crescent in the center.  In the nineteenth century, Prince Abdel Kadir, an Algerian Islamic scholar and political and military leader, led a French resistance movement flying a flag with two vertical stripes, one green and one white.  It is also possible that Messali Hadj, an Algerian nationalist, designed the Algerian flag in the late 1920s.

View all posts by emilyrex