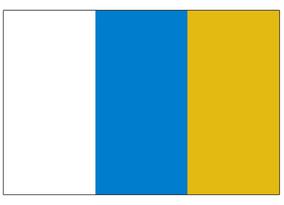 Carmen Sarmiento and her two sons, Arturo and Jesus, all activists in the Canary Islands Independence Movement, designed the flag of the Canary Islands on September 7, 1961. The family made approximately 3000 flags on paper ribbons and distributed them the following day at the “fiesta of the Virgin Mary of Pino.”

The coat of arms of the Canary Islands consists of a blue shield with seven islands inside. Two dogs, in Latin called Insularia Canaria, support the flag, and are thought to depict a large breed of fierce dogs from which the Canary Islands archipelago gets its name. A red crown sits on top of the shield and the word “Oceano” waves on a ribbon over the top.

View all posts by emilyrex

One thought on “Flag of the Canary Islands”