Three States ceded into the Union in the month of August throughout our history. Missouri was the first on August 10, 1821. It was the 24th State and that brought our National Flag to 24 stars and its design was 3 rows of 6 stars with alternating red and white stripe. Then came Colorado on August 1, 1876. It was the 38th State and the 38 stared Flag was 5 rows of alternating 8 in a row and 6 in a row. On August 21, 1959 Hawaii became the 50th State to join the Union. The individual State Flags can be found on the United States Flag Store for a great low price. 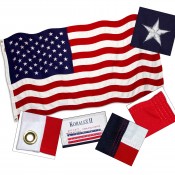 Our 50 star Flag has a unique story that I would like to share because the adding of the 50th Star was done by a High School Senior. It was designed by Robert Heft, a 17 year old that was doing a history project. He took a 48 star Flag and measured out 100 stars on the blue section. Now this was back in 1959 and Alaska had just been admitted into the Union and this young man was pretty forward thinking. So he sewed the stars on with anticipation of Hawaii becoming a State. He turned his project in to his teacher Stanley Pratt. Well Pratt was not too impressed and Heft only received a B-. Heft, thinking ahead as usual argued his point that there would be 50 states in the future. Pratt told him if he could get Congress to accept his design he would change his grade to an A. Heft then sent the Flag to Congressman Walter Henry Moeller (Ohio) until we needed a 50 Star Flag. By August of 1959, President Dwight D. Eisenhower signed the proclamation to add Hawaii to the Union.

Congressman Moeller brought Heft’s Flag to the design committee where President Eisenhower himself choose Hefts’ design out of over 1500 others to choose from to become our National symbol. On July 4th, 1960, Bob Heft stood with President Eisenhower to watch the first 50 Star National Flag be raised. The 50 Star Flag has flown over the United States for 54 years now. What an accomplishment for a young man of only 17 years old. Mr. Heft passed away on December 12, 2009. You may hear Bob’s story in his own words on Story Corps at http://storycorps.org/listen/bob-heft/

Just to let you know Bob did finally get his “A” on his history project!