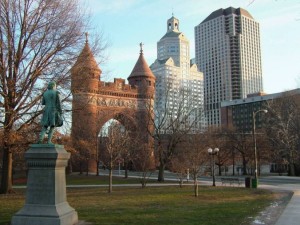 Just one week after Georgia was admitted into the Union, Connecticut became the fifth state to enter on January 9, 1788. Their state flag was adopted in 1897. On their state flag is a shield depicting three grapevines 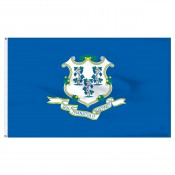 . These grapevines represent early English settlers in the state. Underneath the shield is a ribbon, written in Latin Qui Transtulit Sustinet, or He Who Transplanted Still Sustains, in English. This phrase is the state motto.

Unlike many of the previous states, Connecticut is not named after a person. This state is actually named after the Connecticut River, which that was named Quinnehtukqut by the Mohegans in the Algonquian language. This river was used by the Native Americans for many years who lived in the area.

The state’s capital is Hartford. A few historical events in Hartford include the first FM station to broadcast and The Boys and Girls Club which was founded in 1860. The city is only 18 square miles and houses 125,000 residents. Connecticut ranks the 48th largest state with just 5,544 square miles and 8 counties.