The Flag of Mississippi was officially adopted in 1894 following the state’s appointment of a committee to design an appropriate state flag. The flag features a square version of the Confederate Battle Flag in the upper left corner, a red background that includes a blue southern cross and thirteen white stars inside the cross.  The rest of the flag consists of three large horizontal stripes, one each in blue, white, and red.  Mississippi is the only state in the Union that still incorporates the Confederate flag into their state flag. 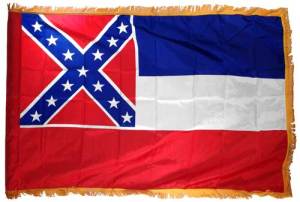